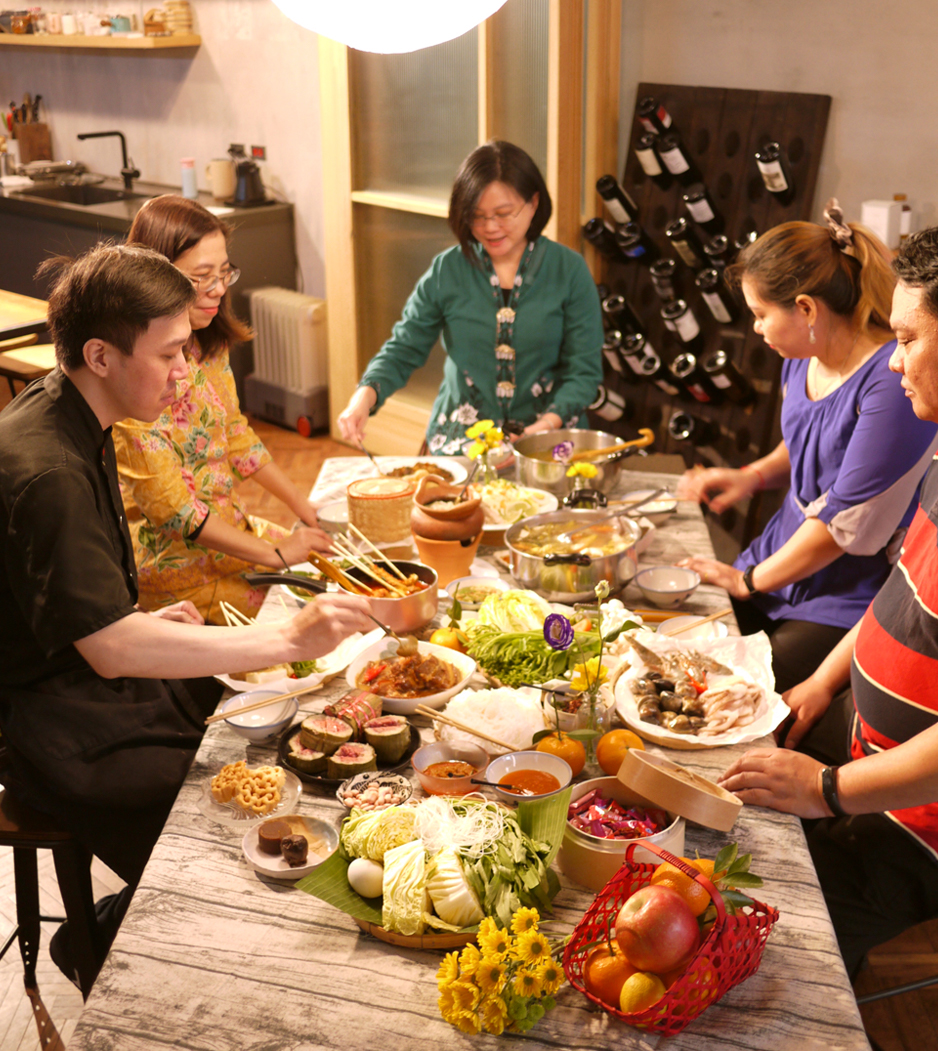 Melting Pot,
I Think Not!

It hasn’t been this cold in Taipei in years. It had only been a few days into 2021 when two cold waves had swept through. Along with the drizzle, the damp chill ate right into my bones, and I had to put on layers and layers of clothes to stay warm. Yet, this is the weather when one turns to a good hotpot.

There’s something warm and comforting about having a hotpot on a cold frigid day. The shivering body signals, demanding steaming food to take the chill off. I grew up in Tainan, and every year on New Year’s Eve, my family would gather at my grandmother’s for a reunion dinner, sitting around a hotpot. In addition to the usual hotpot ingredients, the “longevity vegetable”, baby spinach with roots, is a must on the New Year’s menu. My grandmother would drum into us to eat the vegetable in one bite and not to bite it off, for the sake of its figurative meaning of living a long and healthy life.

Perhaps because of this winter family tradition, I have always felt that there’s no other meal better than a hotpot for a family reunion. With the broth bubbling and boiling away, the family sitting around the steaming hotpot, fishing out hot and savory morsels from the cauldron and tasting the food to the fullest; it feels like all five senses are drifting in the warming atmosphere.  More importantly, the ingredients are dipped into the broth from time to time as the meal goes on; while waiting for the food to be cooked, it would be the time for diners to chat and catch up, and the dining comes to satisfy stomachs and souls. It wasn’t until I attended the recording of LunarFest “Melting Pot, I Think Not!” that I realized that folks in Southeast Asia also adore hotpots.

LunarFest is one of the signature events of Asian-Canadian Special Events Association (ACSEA). Each Lunar New Year, ACSEA would display large-scale installations and host a variety of absorbing events, bringing the air of festivity to our friends in Canada and Taiwan. The theme for this year’s food program is “Melting Pot, I Think Not!”, and we will invite newcomers who came to Taiwan from across Southeast Asia to get together and share hotpots and New Year cuisines from their homelands.

At 9 a.m., I followed the staff, passing the bustling Jingmei Morning Market. We turned to a quiet alley and ascended to the third floor of an old building to Mangiare(慢食寓), the cooking classroom. One after another, the staff and newcomer participants arrived, set up the kitchen and tables and lit up stoves. The space was beginning to hum with life, with an exotic but savory smell filled in the air.

In the kitchen, Ah Ming, the chef of Thai Happiness Thai Food, was preparing ingredients for the Jim Jum (Thai clay hot pot); the Indonesian soto ayam simmering away on the stovetop. At the dining table, Ngoc Suong Ngo, who runs the Mien Tay Vietnamese Restaurant, was dipping fresh fish into a pot of boiling sweet and sour basa fish soup; her Taiwanese husband Ko-Shuo Mei, a former elementary schools teacher, was assisting aside. Bee Yeng Wang, the English teacher from Malaysia, was preparing for satay celup, skewering morsels on bamboo sticks and about to simmer them into carefully crafted satay broth.

Though these cuisines are all named hotpot, their flavors and tastes are quite distinct. According to Chef Ah Ming, in Northern Thailand where the climate is colder, it is also customary for locals to eat around a hotpot. They would heat up a clay pot over charcoal, adding galangal, lemongrass, lemon leaf into the water then bringing it to boil for flora and fauna. Cooked ingredients will be eaten with a dip combining lemon juice, garlic, chili pepper, coriander, sugar and fish sauce, and if one prefers stronger flavors, one could add Cantonese hotpot sauce as well.

The broth of Vietnamese sweet and sour basa fish soup is made with fastidiousness. According to Ngoc Suong, the broth is made by boiling pork leg bones, onions and other ingredients for four long hours, then adding pineapple, lemon, tamarind, tomato, fresh chili pepper, lemongrass, Vietnamese coriander, and freshwater basa fish that are only available in Vietnamese groceries. The simmering yields a spicy, sour and sweet taste, and it can be cooked with any ingredients that the diner wants, served along with a dip made by stir-frying chili pepper and lemongrass with green onion, coriander and pure fish sauce.

Teacher Bee Yeng’s satay celup is a Malaccan hotpot. The broth, which she had prepared earlier at home, was delicately balanced by sautéing shallot, garlic, lemongrass, galangal, coconut sugar, tamarind, peanut and chili pepper into a rich and aromatic stock. The ingredients for cooking were crafted as well. There was stuffed tofu and sweet pepper stuffed with ground fish, and even the kangkong vegetable was tied into knots and skewered on sticks.

The hotpot is not merely a feast: it is integral to memory and nostalgia.

Chef Ah Ming said that his grandfather was from Hainan; his father was a Taiwanese immigrant in Thailand, and his mother was Thai. Born and raised in Thailand, Ah Ming decided to come to Taiwan at the age of 17 and has been living here for 14 years. Taiwanese hotpot is an old favorite of his, but he would always bring along a homemade Thai sauce for an authentic taste of home.

Teacher Mei and Ngoc Suong met through singing. In the beginning, Mei was curious about Vietnamese music and found that many of them were covers of Taiwanese songs. This discovery piqued his interest and led him to learn Vietnamese on his own. Later, when he met Ngoc Suong, she was thus impressed by him speaking some Vietnamese. The Taiwanese song Choose You was their token of love. As Mei said, the lyrics are a metaphor of their relationship, that despite his mediocre appearance, his love for her is gentle.

“My Vietnamese sisters always say that they miss the taste of hotpots from home,” said Ngoc Suong. Mei explained that they don’t usually serve this sweet and sour basa fish soup as it’s not popular among Taiwanese, but whenever they receive orders from Vietnamese friends, they’d prepare it especially for them. The couple believes that it is not only the taste of home that relieves the sisters’ homesickness but also the same understanding of nostalgia.

Bee Yeng met her Taiwanese husband on a trip to Taiwan and has lived there since her marriage. She said that the hotpot culture in Malaysia was brought by Teochew immigrants, who also augmented the Southeast Asian satay into Shacha sauce. The sauce was then introduced to Taiwan and developed into one of the specialties of Taiwanese cuisine. The rich and fragrant satay celup is a vague reminder of the connection between Malaysia and Taiwan, as well as the fascinating history dated back.

As lunchtime approached, mouth-watering dishes were served. In addition to the hotpot, the houseful also prepared archetypal New Year dishes from their hometowns, sharing the various whiffs of a New Year atmosphere. On the table was Indonesian dessert Onde Onde; its round sesame balls symbolizing reunion. Chef Ah Ming presented a spicy Northern Thai pork dish with glutinous rice; the Thai pronunciation of the dish is similar to “fortune” and thus it is considered to be a dish that brings good luck for the New Year.

Ngoc Suong placed slow-braised pork and sweet rice dumplings which are a must for the New Year in Vietnam. She said that on the first day of the Lunar New Year, Vietnamese families would make their own rice dumplings that come in both salty and sweet flavors. The salty ones are stuffed with green beans and pork, while the sweet ones are filled with black beans, coconut milk and glutinous rice. The rice dumplings are wrapped in banana leaves, and when cut open, one would find cooked bananas wrapped in the center of sweep dumplings, taken on a beautiful natural pink color and a sweet-and-tart taste.

Teacher Bee Yeng brought out a bucket of Kuih Rose, honeycomb-shaped cookies that are traditional to Malaysian Chinese. She said that the culture of these “cookies” was actually influenced by India. Though the ingredients were simple — only cornflour, sugar and water, when her Taiwanese friends had a taste of it, they praised it for a “familiar traditional taste”. It is rather complicated to make these cookies, especially when you have to stand for a long time by a fiery frying pot, dipping the mold into the batter and dunking the mold in oil for deep-frying, then repeating the whole process when one cookie slides off. “As a child, I hated being assigned this chore by my elders,” said Bee Yeng.

A slanting sunlight poured through the overcast sky. The table was laden with fragrant and steaming dishes. Let’s eat! The group sat down at the table and introduced the food they brought. The four were amazed at the taste of others’ dishes and were surprised at how similar spices could create such a variety of cuisines. With the international dishes laid out, it was a great opportunity to break down the boundaries of food: Vietnamese sweet and sour basa fish soup with Thai sauce; Malaysian satay with Thai glutinous rice. The potpourri of flavors tickled their taste buds. These wonderful exchanges wove together the various strands of unique cultural cuisines, sparked off the possibility to resonate and thrive with each other.

Teacher Bee Yeng said that she used to take these Malaysian dishes for granted, and it wasn’t until she left home and attended cultural exchange events such as the “Melting Pot, I Think Not!” that she recognize the methods and context behind the cuisine, and began to understand the need to pass on the flavors of her homeland. Just as Chef Ah Ming always brings Thai sauces to his hotpot dining, and Vietnamese sisters gather at Ngoc Suong‘s restaurant, enjoying their beloved sweet and sour basa fish soup, the taste of home is the root of immigrants. The familiar taste is what makes one possible to establish a solid footing in a foreign land, to express oneself, to heal, and to be empowered.

Ngoc Suong said that although she missed her family and was unable to return home this year due to the COVID-19 pandemic, she was “very happy and satisfied” to have the opportunity to participate in “Melting Pot, I Think Not!”. Hearing her say so, I suddenly realized that during the pandemic, when we could not go abroad, it is perhaps an opportunity for us to take a break and get to know our neighbors and our new immigrant friends and to see the people who live on the same land with us.

“Apart from embracing these migrant workers and immigrants, ” teacher Mei said, “we should also care about whether they could negotiate the cultural difference, and whether they feel at home in Taiwan.” From my perspective, the “Melting Pot, I Think Not!” has laid out on the table the expectant sense of home — the space that all of us share. I hope that one day, Taiwan will truly become an open platform, selflessly carrying these countless beautiful stories, so that the living from other places can blossom here and make it their second hometown.